Bitcoin, the most popular cryptocurrency, was established in 2009 by an anonymous programmer known as Satoshi Nakamoto. A maximum of twenty-one million (21,000,000) Bitcoin units can be created, and such limited supply has contributed to investors bidding the price up as demand grows. In November 2016, China became the largest Bitcoin market in the world due in part to the country’s then permissive policies with respect to cryptocurrencies.[1]

On December 3, 2013, out of a deep concerns regarding money laundering and a threat to China’s financial stability, the People’s Bank of China and four (4) other government offices jointly issued the Notice to Prevent the Risk of Bitcoin (关于防范比特币风险的通知), in order to prohibit domestic banks from providing bank services for Bitcoin business (the “2013 Bitcoin Notice”). The price of Bitcoin plummeted after the release of the 2013 Bitcoin Notice but subsequently recovered and went on to reach a series of new price peaks.[2] 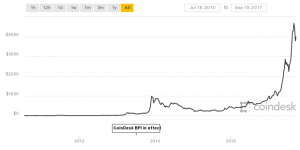 Since the beginning of 2017, the number of ICO platforms in China has also sharply increased. According to the China ICO Development Report for the First Half of 2017 (2017上半年国内ICO发展情况报告), which was issued on July 26, 2017 by National Internet Finance Association of China (国家互联网金融安全技术专家委员会) (“NIFAC”), an association guided by MIIT, by July 18, 2017, an aggregate of RMB 2.62 billion, which is approximately equivalent to US$400 million, was raised through sixty-five (65) ICO programs operated by forty-three (43) ICO platforms. Before 2017, only five (5) ICO programs were operated in China. 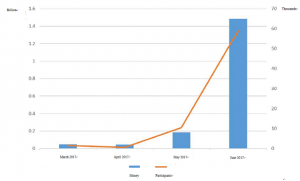 Such growth of ICOs has caused concern among officials in China. Yang Dong (杨东), a professor at China’s Renmin University (中国人民大学), offered the following series of explanations for the adoption of the Cryptocurrency Rules in an interview with China Central Television (中国中央电视台):  (i) China’s domestic cryptocurrency trading platforms are largely unregulated; (ii) cross-border payment via cryptocurrencies can be utilized to evade foreign exchange controls; (iii) the price of cryptocurrencies are easily-manipulated and can therefore potentially cause financial instability; and (iv) the anonymous nature of cryptocurrencies without strict protective measures make transactions difficult for the government to monitor.[6]

Over the past several months, numerous governments around the world have expressed concern over ICOs.  The United States Securities and Exchange Commission, for example, released an investor bulletin on July 25, 2017 to warn consumers about the potential risks of ICOs.[7]  The United Kingdom Financial Conduct Authority, the Monetary Authority of Singapore and Hong Kong Securities and Futures Commission have also published similar consumer advisory reports.[8]  China, however, seems to have adopted the strongest regulatory measures with respect to ICOs – a complete ban and criminalization.

Pursuant to the Cryptocurrency Rules, ICOs are illegal fundraising activities without official authorizations, and ICO issuers, promoters and/or sponsors might be prosecuted for criminal offenses, including illegal issuance of cryptocurrency or securities, illegal fund-raising, financial fraud or pyramid selling.

The Cryptocurrency Rules also require ICO platforms and other relevant institutions to halt ICO activities in China immediately, and to return assets held in investors’ accounts to such investors as soon as possible.

Further, MIIT will shut down the websites, and delist the mobile applications from app stores, of online cryptocurrency trading platforms, and will request that SAIC suspends the business licenses of such online trading platforms.

On September 15, 2017, the Beijing Internet Finance Risk Working Group (北京市互联网金融风险专项整治工作小组办公室) (the “Beijing Working Group”), a working group organized by the Beijing municipal government, held meetings with senior officials of cryptocurrency trading platforms in Beijing, and required each such platform to:  (i) specify a deadline by which such platform will cease all cryptocurrency trading; (ii) immediately cease registering new clients; and (iii) prepare a detailed refund plan to return assets to clients.  According to Caixin, a prominent news agency in China, the senior officer of the Beijing Working Group emphasized that the purpose of the meeting is to shut down all internet channels for cryptocurrency trading and exchanges, including not only the websites and internet forums, but also chat groups on Wechat and QQ, two of China’s most popular online communication platforms. Cryptocurrency trading platforms in Shenzhen and Shanghai have also received similar official notifications from competent authorities.[9]

Following the release of the Cryptocurrency Rules and the above-described working group meetings, China’s largest cryptocurrency platforms released announcements notifying their customers that such platforms would cease business:

4. Other Requirements under the Cryptocurrency Rules

The Cryptocurrency Rules also impose the following requirements for other market participants:

China’s new approach toward cryptocurrency sent global prices and domestic trading volumes into sharp decline. The price of Bitcoin fell below the symbolically significant level of US$3,000 per coin on September 15, 2017 for the first time in over a month, and Bitcoin was down as much as 7.8% against the dollar at one point.[15] In previous years, China’s market accounted for more than ninety percent (90%) of all Bitcoin trades. Today, China’s market now accounts for approximately ten percent (10%) of all Bitcoin trades,[16] as many investors have shifted their cryptocurrency trading to exchanges in Japan, South Korea and the United States.[17]

[1] See “Why has China Declared War on Bitcoin and Digital Currencies?”, posted at The Street on September 18, 2017.

[10] See “BTCChina Clarification on the Decision to Shut Down Its Exchanges”, posted at BTCChina website on September 14, 2017.