On August 18, 2017, the National Development and Reform Commission (国家发展和改革委员会) (“NDRC”), Ministry of Commerce (商务部) (“MOFCOM”), the People’s Bank of China (中国人民银行) and Ministry of Foreign Affairs (外交部) jointly published Further Guidelines on the Monitoring and Supervision of Outbound Direct Investment (关于进一步引导和规范境外投资方向的指导意见) (the “ODI Guidelines”).  The main purpose of the ODI Guidelines, which are consistent with a series of written and unwritten restrictions on outbound direct investment (“ODI”) implemented over the past 18 months, is to promote ODI in sectors that align with China’s national economic and strategic goals.

China previously adopted rules that streamlined the approval process for ODI.  Pursuant to (i) the Measures for the Management Outbound Investment Regulations (境外投资管理办法), issued by MOFCOM on September 9, 2014, and (ii) the Measures for the Administration of Confirmation and Recordation of Overseas Investment Projects (境外投资项目核准和备案管理办法), issued by NDRC on May 8, 2014, ODI projects are subject to the approval of different authorities depending on (a) the investment amount, and (b) whether the investment is related to “sensitive regions” or “sensitive industries”.[1]  According to the relevant rules, if the investment amount of an ODI project is less than US$300 million and such investment is not a sensitive investment, then such investment should only need to be registered with the local branch of MOFCOM, and the investors can then work with their relevant People’s Republic of China (“PRC”) bank to convert Renminbi into foreign currency.

A slower economic growth rate, lower Renminbi exchange rate against the U.S. dollar and fewer foreign exchange reserves, however, have caused China to start imposing formal and informal restrictions on ODI since early 2016.

In particular, restrictions in connection with the approval process for converting Renminbi into foreign currency have made completing ODI projects increasingly difficult.  In December 2016, a joint press release regarding ODI from NDRC, State Administration of Foreign Exchange (国家外汇管理局) (“SAFE”) and other governmental agencies indicated that SAFE will view an ODI project negatively, and likely prohibit conversion of Renminbi into foreign currency, if the project involves any of the following elements:[2]

As a result of the formal and informal restrictions, according to a senior officer of the Department of Outward Investment and Economic Cooperation (对外投资和经济合作司) of MOFCOM, from January 2017 to July 2017, China’s aggregate ODI fell to US$57.2 billion, a decrease of 44.3% compared with the first seven (7) months of 2016.[3]

In line with previously adopted written and unwritten rules, the ODI Guidelines classify ODI projects by industry into three categories.  The table below describes each such category. 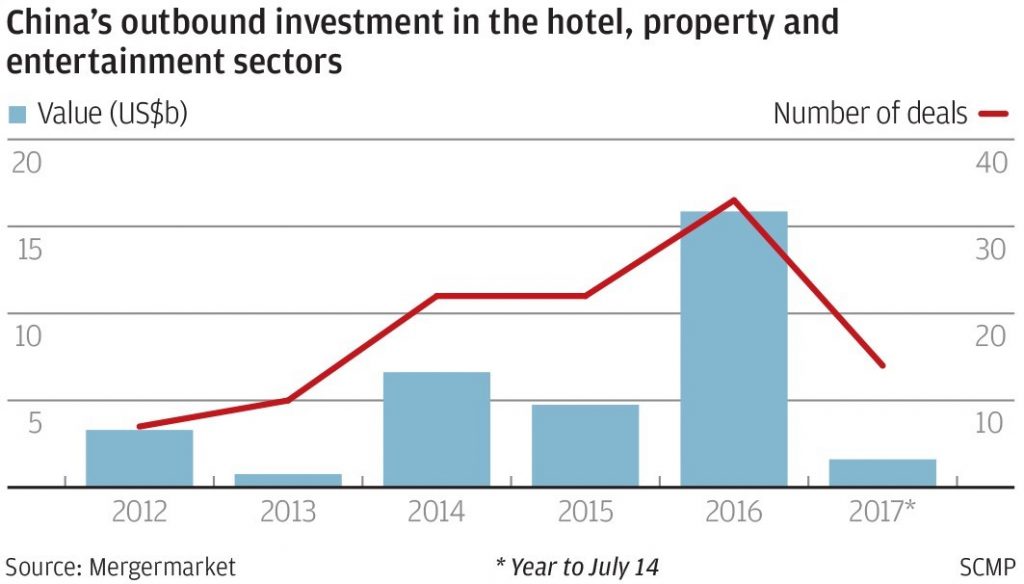