During much of 2016, China’s State Administration of Foreign Exchange (国家外汇管理局) (“SAFE”), the ministerial level agency tasked with regulating foreign exchange matters, has informally changed its policies to restrict the ability of companies based in the People’s Republic of China (the “PRC” or “China”) to convert Renminbi into foreign currency for the purpose of making offshore direct investments (“ODI”). These policy changes have taken place as China’s economic growth rates decline and China experiences a weakening of its currency and a decline in its foreign exchange reserves. This regulation watch provides background on China’s foreign exchange controls, an overview of China’s written rules for ODI, and our “best guess” at SAFE’s recent policy changes relating to ODI procedures based upon our contacts with various market participants.

The Renminbi, China’s currency, which is also known as the yuan, is fully convertible under the current account, which means that companies based in China may convert Renminbi into U.S. Dollars or other foreign currencies to pay for things like services provided by an offshore company or imported manufacturing component parts. The Renminbi is not fully convertible, however, under the capital account. As a result, converting Renminbi into U.S. Dollars or other foreign currency for purposes of making offshore direct investments or ODI is subject to certain PRC government restrictions.

During the past several years, under the policy roughly translated as the “Going Global Strategy” (走出去战略), the PRC government has encouraged PRC companies to make foreign investments in order to obtain offshore resources, such as advanced technologies or important raw materials. To implement this strategy, the PRC government issued various regulations which simplified the approval process for ODI.

Starting in early 2016, however, SAFE began to adjust its policies to impose restrictions on ODI. These restrictive measures generally involve detailed scrutiny of proposed ODI projects by banks and SAFE, as well as the exercise of SAFE’s discretionary power to reject any ODI project. Unfortunately, SAFE did not change its policies through an official public rule, but rather on an informal basis. As a result, information on many of these policy changes is generally only available through informal contacts with market participants.

There have, however, been several formal rule changes that reflect the general policy shift toward greater restrictions on ODI, including the following:

Some proposed changes have been reported in the press but have not yet been released as actual rules or requirements. For example, Nanyang Sin-Chew Lianhe Zaobao (联合早报), a prestigious Chinese language news agency based in Singapore, reported that the PRC government is considering requiring state-own companies to sell a certain percentage of their foreign currency to the central bank in exchange for Renminbi.[3]

Other changes are unverified, however, but may very well also be correct. We understand, for example, that the staff of certain PRC banks have been instructed to not share articles on their WeChat groups that relate to Renminbi depreciation. 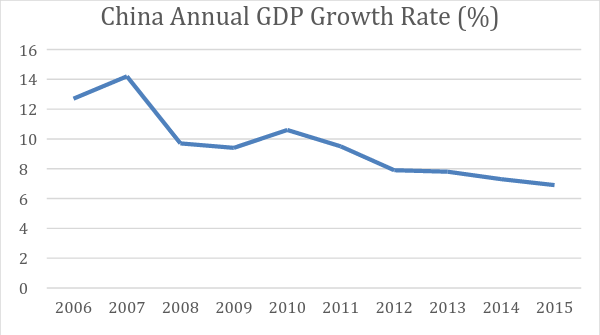 Source: based on the data on Nation Bureau of Statistics of China website[5] 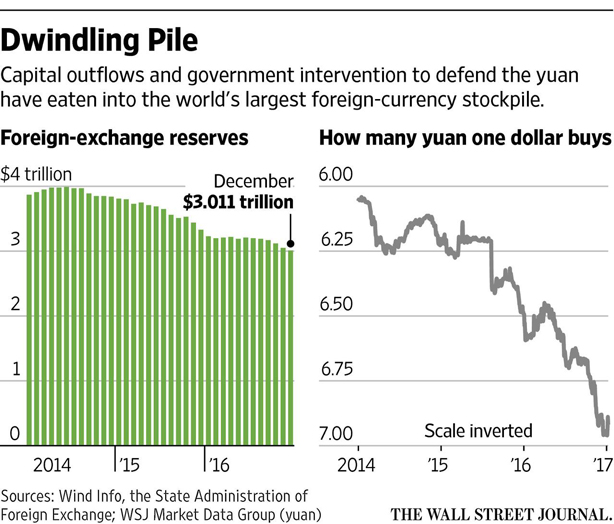 In connection with China’s “Going Global Strategy”, as noted above, China adopted rules that streamlined the approval process for offshore direct investment, or ODI. Pursuant to Article 8 of the Measures for the Administration of Confirmation and Recordation of Overseas Investment Projects (境外投资项目核准和备案管理办法), which was issued in May 2014 by the National Development and Reform Commission (国家发展和改革委员会) (“NDRC”), ODI projects are subject to different approval authorities depending on (i) the investment amount and (ii) whether the investment is considered “sensitive”:

In addition, according to Article 1 of the Notice of the State Administration of Foreign Exchange on Further Simplifying and Improving Policies for the Foreign Exchange Administration of Direct Investment (国家外汇管理局关于进一步简化和改进直接投资外汇管理政策的通知) issued by SAFE in June 2015 (the “SAFE Simplification Notice”), SAFE has authorized PRC banks to review and process ODI foreign currency exchange matters, and SAFE will only indirectly oversee the process rather than being directly involved.

Since most ODIs are not Sensitive Investments and are less than US$300 million, under the existing ODI regulating system, the governmental approval process is not that complicated. The investing party generally need only (i) complete the registration process with the local branch of MOFCOM, and (ii) work with their PRC bank to convert Renminbi into foreign currency.

Based on conversations with our contacts at PRC banks and other market participants, as well as various domestic news sources, below is a summary of our “best guess” at recent ODI approval practices.

In addition to the above informal policies, SAFE is now a defacto decision maker for ODI projects and appears to be exercising this approval authority on a case-by-case basis.

In the current macroeconomic environment, it does not appear as though the ODI approval process will become easier in the near term. In addition, if China’s currency continues to weaken and its foreign exchange reserves continue to fall, additional restrictions on ODI projects are likely to be adopted. Due to the now cumbersome approval process and the significant chance of failing to obtain the required approval, many PRC banks are advising their clients to avoid pursuing ODI projects in the near term.

[4] See data on Nation Bureau of Statistics of China website.

[5] See data on Nation Bureau of Statistics of China website.