Foreign investment in the People’s Republic of China (the “PRC”) is either restricted or prohibited in several industries such as the telecommunications industry, which includes most internet focused businesses. The primary regulation with respect to foreign investment restrictions in China is the Foreign Investment Catalogue (外商投资产业指导目录), which classifies all industries as encouraged, permitted, restricted or prohibited with respect to foreign investment. The telecommunication industry, for example, is classified as restricted,[1] while internet cultural activities and online publishing services are classified as prohibited[2].

In certain restricted industries, such as the telecommunication industry, foreign investment must take the form of an equity joint venture and the foreign ownership interest in the joint venture may not exceed fifty percent. In prohibited industries, such as those involving internet cultural activities and online publishing services, foreign investment is not permitted in any form. For example, the Ministry of Culture ( 文 化 部 ) does not accept applications from foreign-invested enterprises for an internet culture operation license and the State Administration of Press, Publication, Radio, Film and Television (国家新闻出版广电总局) (“SAPPRFT”) will not accept applications from foreign-invested entities for an online publishing service license.

Notwithstanding these foreign investment restrictions, many of China’s companies that operate in restricted or prohibited industries have received financing from foreign venture capital funds and listed their shares on overseas stock exchanges.[3] Such companies have achieved what they believe to be technical compliance with the foreign ownership restrictions by establishing a variable interest entity (“VIE”) structure in which the foreign-invested entity does not have a direct ownership interest in the domestic operating company that holds the licenses required to operate in the restricted or prohibited industry in China. 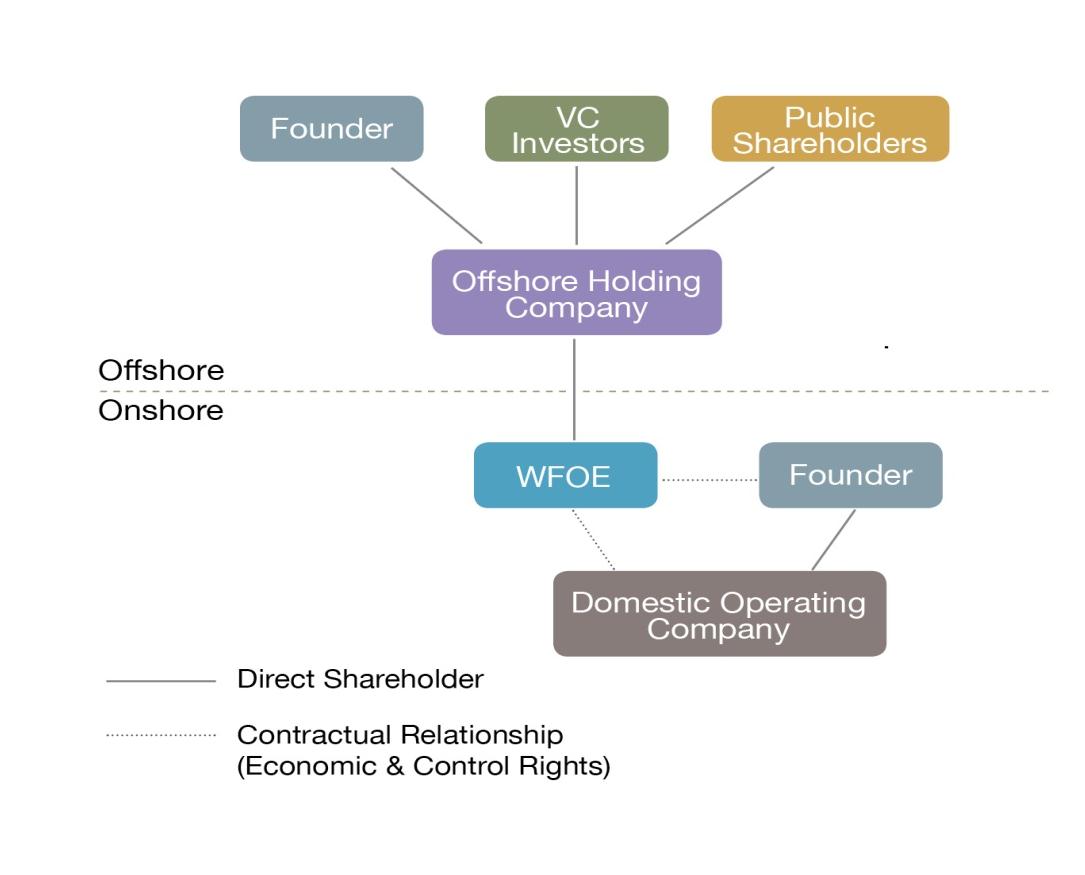 Although the contractual relationships among the WFOE, the operating company and the operating company’s shareholders vary from one VIE structure to another, these contractual relationships generally include, or should include, the features summarized below. (For a list of the specific features of the VIE structures for a sample group of internet companies in China, see Annex I.)

1)   Purchase Option. The WFOE generally has a right to purchase the shares of the operating company from its nominee shareholders once such a purchase is permitted by applicable law.

3)   Revenue Agreements. The WFOE generally enters into one or more agreements with the operating company that permit the WFOE to extract substantially all of the profits from the operating company, such as a consulting agreement, a technical service agreement, and a variety of copyright license agreements. The fees charged under these agreements are generally not fixed amounts, but vary depending upon costs incurred, revenue generated or some other set of variables.

6)   Spouse Consent Letter. Any nominee shareholder that is married at the time he receives his equity interest in the operating company, or later becomes married, should have his spouse execute a spouse consent letter. This spouse consent letter should confirm that the equity interest of the operating company is the separate property and personal asset of the nominee shareholder, and that if the spouse inadvertently obtains any right to such equity interest then the various VIE agreements executed by the nominee shareholder shall also bind the spouse. Prior to 2011 when Tudou’s initial public offering was delayed as a result of the founder’s divorce proceedings and an attempt by his spouse to obtain an ownership interest in Tudou’s operating company, this risk was not well understood. Accordingly, many current VIE structures do not include a spouse consent letter.[5]

Although this VIE structure has been in use since the first China internet companies listed their shares on NASDAQ in 2000,[6] there are certain risks associated with the structure. For example, the nominee shareholders of the operating company are often the original founders, their family members or their trusted employees. If a conflict arose between these nominee shareholders and the management of the offshore holding company, the nominee shareholders could attempt to challenge the validity of the various control contracts.[7] Since the control contracts do not comply with the spirit of the foreign ownership restrictions, a court in China may find that the control contracts are not enforceable. In addition, the Ministry of Culture, SAPPRFT or the Ministry of Industry and Information Technology (工业和信息化部) could determine that the VIE structure violates the foreign ownership restrictions and terminate the licenses held by the operating company that are required in order to operate in the restricted or prohibited industries.

In addition to these risks and others listed in the disclosure documents of the various PRC companies operating in restricted or prohibited industries with shares listed on overseas stock exchanges, the VIE structure is also tax inefficient. All of the profits that are extracted from the operating company by the WOFE through consulting agreement fees are subject to a six percent (6%) value-added tax.[8]

Finally, although the VIE structure has advanced the development of several industries in China, including the internet industry, by facilitating foreign venture capital investments and overseas public offerings, this same structure is generally not regarded as a viable means for foreign companies that operate in restricted or prohibited industries to enter China’s domestic market. Some foreign companies have used the VIE structure to enter China’s domestic market for internet culture activities and internet publishing, but they have generally done so in a very low profile manner with careful consideration given to the branding of the domestic operating company’s service platform. High profile foreign companies generally do not view the VIE structure as a viable way to enter China’s restricted or prohibited industries. Amazon.com, Inc, however, announced in 2012 that its operations in China were conducted through a VIE, which suggests that at least one high profile foreign company had entered restricted sectors of China’s economy through the use of this structure.[9]

On July 2, 2016, the Supreme People’s Court of China (最高人民法院) (the “Supreme Court”) issued a decision related to the VIE structure, which may provide some comfort to the investors in a VIE structure since the court was invited to consider the validity of VIE agreements and to invalidate them for violating PRC law, but the court declined to do so.

Although the decision didn’t affirm the validity of VIE agreements, the Supreme Court’s decision to not invalidate the VIE structure suggests that there is an understanding of the harm that invalidating the structure would likely cause to the many PRC businesses that rely upon this structure for foreign investment and overseas stock exchange listings. Below please find a summary of the key facts the case and relevant holdings in the Supreme Court decision.

2)   Although it is correct that a contract can be voided if it violates mandatory requirements under “PRC laws and regulations”[10], “PRC laws and regulations” only refers to the laws and regulations issued by the National People’s Congress (全国人民代表大会) (“NPC”), the Standing Committee of the NPC (全国人民代表大会常务委员会), or the State Council ( 国 务 院 ), and does not refer to local rules or other administrative rules. The Foreign Investment Catalogue is an administrative rule promulgated by the National Development and Reform Commission (国家发展与改革委员会) and the Ministry of Commerce (商务部). As a result, the Framework Agreement is not deemed void due to the violation of the Guidance of Foreign Investment Industries.

Although the Supreme Court did not hold the Framework Agreement void, the decision also does not constitute formal judicial recognition of the VIE structure. In the holding, the Supreme Court stated that “whether or not the VIE agreements are valid is not an issue in dispute between Yaxing and Ambow Domestic Company, and therefore this issue will not be decided by this court”. In addition, in the holding, the Supreme Court suggested that the Ministry of Education (教育部) should take measures to punish any illegal activities in this field through administrative actions.

Other government authorities, such as Ministry of Commerce ( 商 务 部 ) (the “MOFCOM”), have also struggled with the validity of the VIE structure. In the draft of the proposed Foreign Investment Law (中华人民共和国外国投资法（草案征求意见稿）) that MOFCOM published for commentary on January 19, 2015 (the “Draft FIL”), MOFCOM introduced the “actual control” principal as a classification method to determine whether a company in China is to be classified as foreign or domestic, and provided that a company under the control of one or more foreign natural persons or entities will be treated as a foreign company.[11] The term “control” was defined to include any of the following: (1) holding equity ownership over 50%; (2) having a right to appoint a majority of board members, ensuring its nominee can occupy a majority of the board seats or exerting a significant impact on board or shareholder resolutions; or (3) having significant influence over the company’s management, finances or personnel through contract or trust.[12] Implementation of the “actual control” approach in the context of foreign investment classification suggests that MOFCOM is trying to prevent foreigners from evading China’s foreign investment restriction through the use of the VIE structure. As such, we suspect the validity of the VIE structures for many PRC companies listed on foreign stock exchanges to be called into question if the Draft FIL is adopted in its current form. As of April 2017, however, there is still no clear signal that MOFCOM will adopt the Draft FIL any time soon, which suggests that the PRC government is unlikely to invalidate, on short notice, the VIE structure because of the material damage that this could cause to many of China’s leading internet companies, including Tencent and NetEase.

Set forth in the table below is a list of the specific features of the VIE structures for several internet companies in China, which is based upon the public filings of such companies with the U.S. Securities and Exchange Commission or the Hong Kong Stock Exchange.

For a description of each of the headings set forth in the table below, please refer to Section 2 (Variable Interest Entity (VIE) Structure Overview).

[5] For a discussion of the nominee shareholder’s spouse risk factors, see “Tudou IPO Exposes Yet Another China Risk Factor: the Founder’s Wife”, by Greg Pilarowski on August 19, 2011 at the New York Times, via Venture Beat.

[7] See “GigaMedia will Survive Current VIE Turmoil”, posted at Seeking Alpha on June 3, 2011, for a summary of GigaMedia’s loss of control over its VIE Shanghai T2 Entertainment. For an example of a failed VIE outside of the internet sector, see this Form 8-K filed with the Securities and Exchange Commission by Buddha Steel Inc. on March 28, 2011. See “Getting to the Bottom of the Alipay Dispute”, posted at Caixin Online on June 24, 2011, for a summary of the unilateral decision of Aliaba’s founder Jack Ma to terminate the VIE structure agreement through which Alibaba controlled Alipay, one of the largest online payment platforms in China.

[9] See “MNCs and VIEs” by Paul Gillis at chinaaccountingblog.com. See also page 32 of Amazon’s report on Form 10Q for the quarter ended June 30, 2012, at the SEC website.

[10] See Article 52, Section 5 of PRC Contract Law (中华人民共和国合同法), issued by the Standing Committee of the National People’s Congress in March 15, 1999.